This single form entry primary school is located on a gently sloping greenfield site on the outskirts of Cradley village and is surrounded by a designated area of outstanding natural beauty. The linear design, which is slightly curved on plan, is orientated to allow views of open countryside to the west from each classroom and the warmth of the late afternoon sun.

While we have various projects, either currently under construction or about to enter construction, that adopt the latest thinking in sustainability Cradley school, which was designed in 2003, demonstrates that we have been adopting sustainable design principles for a number of years. Its design embodies principles that now form part of the BREEAM assessment process, which are outlined in the expanded text below.

The project received encouraging remarks from CABE when it was granted planning permission. We strongly commend the coherent and well considered design of this scheme, which we are confident will prove a success for staff and pupils.

Site earthworks were designed to eliminate the export of material from site. Arisings were used not only to achieve the required plateau areas for the building and playing fields but also to create berms for sports field spectators and to define an external story telling area. Low grade subsoil was used to create a natural flora area within the western area of the site while a small allotment area is located close to the school for the pupils to grow vegetables and flowers.

The surface water drainage system adopted sustainable design principles with below ground storage to achieve green field run off rates to an existing watercourse. This also had to be designed to address groundwater problems encountered on site.

The building adopted well insulated fabric standards and incorporates natural ventilation throughout. This uses a combination of opening windows and stack ventilators to the main hall and to the classrooms.

Good natural lighting is achieved throughout using a combination of conventional windows, rooflights and Sunscoops (at the time the school was used in Glidevale’s marketing literature as an example project for Suncoops).

Solar control was considered in the design through orientation on the plan, roof overhangs and the use of external free standing brie soleil.

Lighting within the school adopted intelligent principles, turning off when there was sufficient natural light.

The design achieves good internal acoustic standards with reverberation times being addressed through the use of perforated plasterboard.

The possibility of using green roofs for the school was investigated at the time but rejected by the school governors due to potential maintenance concerns. Zinc was ultimately, which has an A Green Guide rating.

Materials were selected for durability and sustainability e.g. linoleum sheet flooring Green Guide A+ rating, clay bricks A+ rating. Pre finished timber windows and glazed screens were used throughout. The roof was constructed using plane timber sections with the exception of the hall which used laminated timber beams. 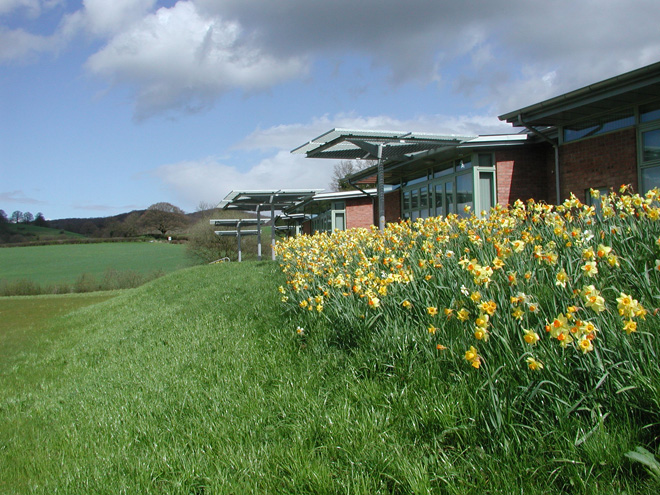 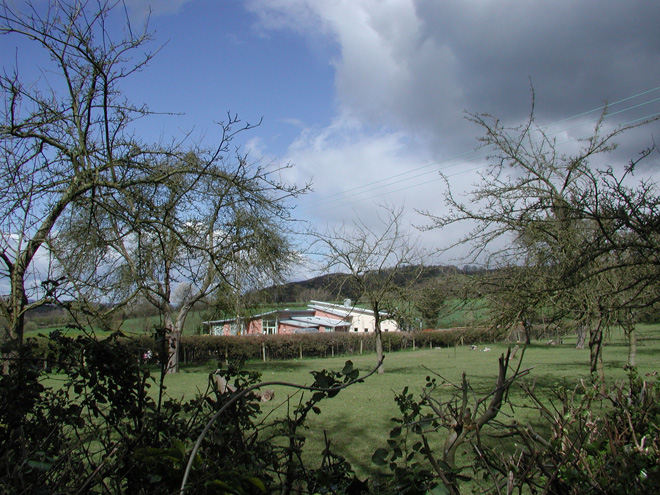 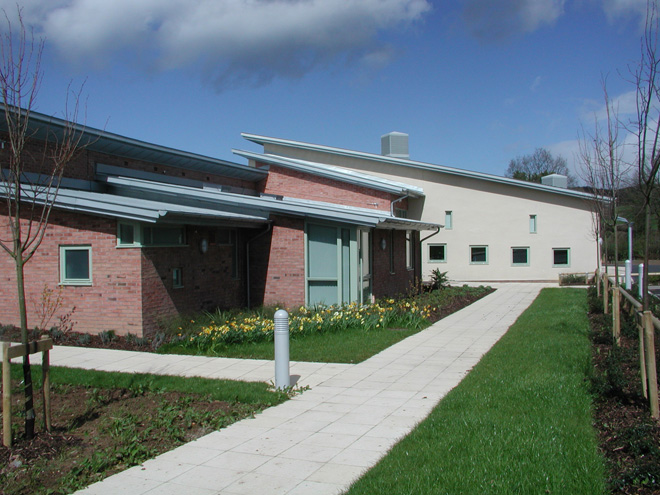 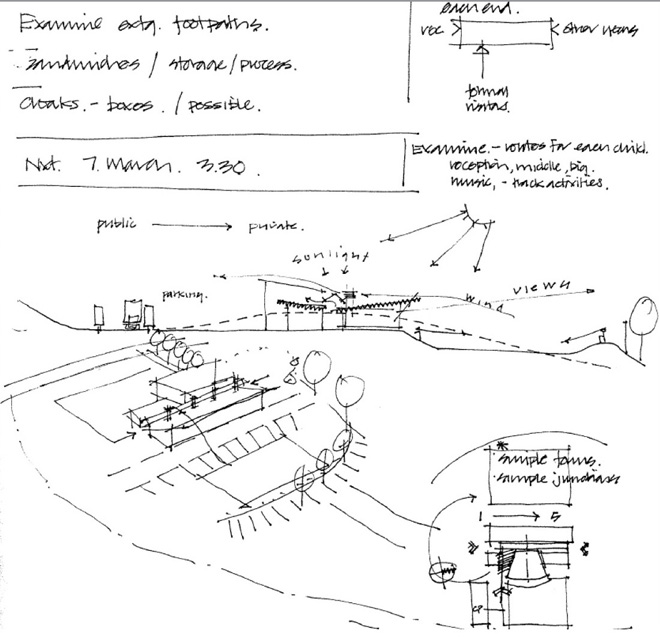 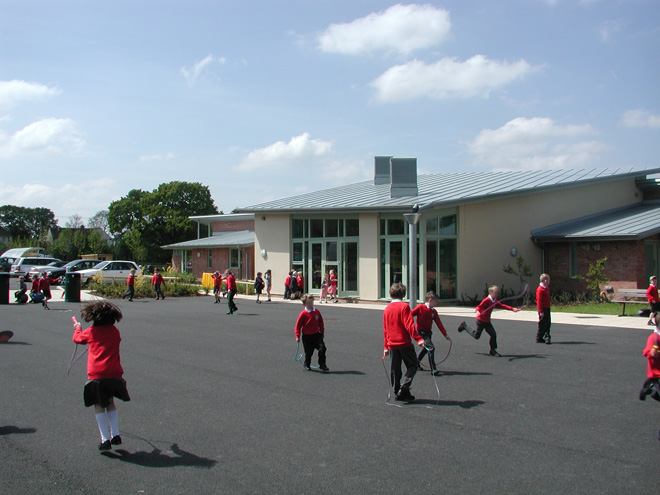 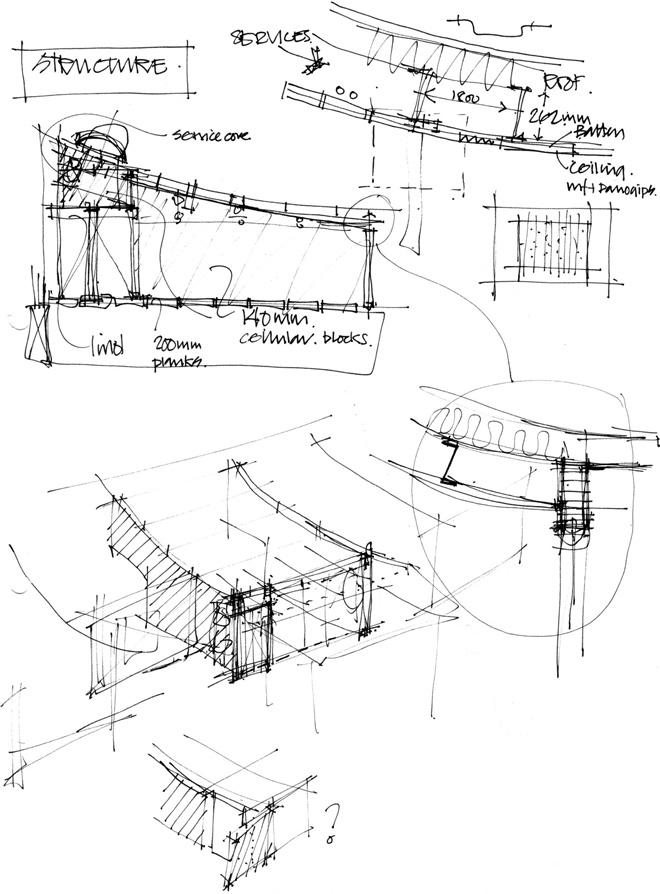 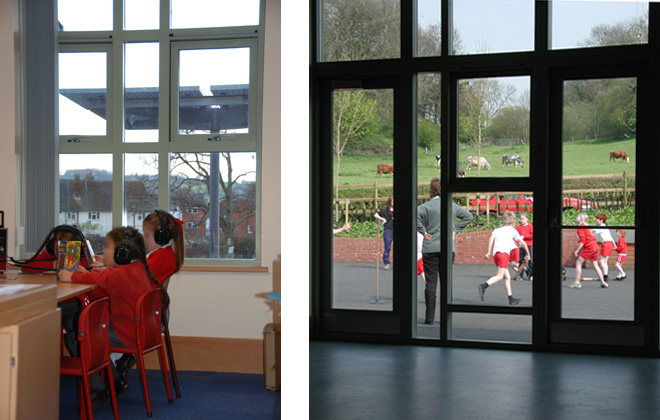 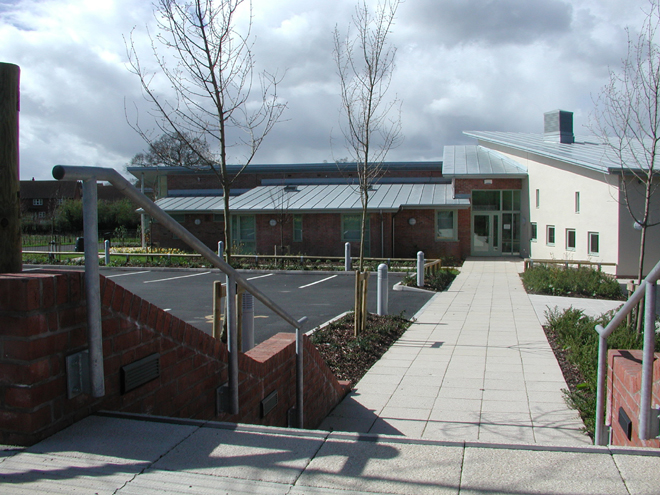 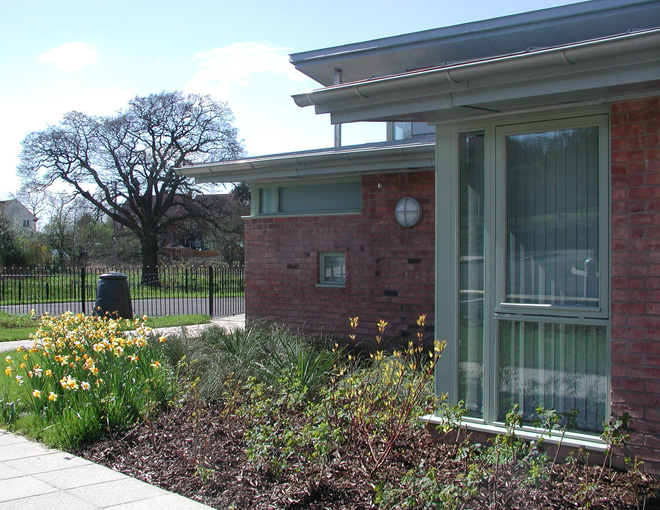